Text only | Text with Images

I translated those two files into "Informal German":  SPortal.english.php and SPortalAdmin.english.php

This are quite long files, with a lot of different strings. But some of them say just nearly the same than others do. So maybe the files could be made shorter?

For example "activate" and "deactivate" are the same in each part of the portal, but they always have their own string. Or some parts of sentences are always the same, as "This allows you to do xyz" or "Are you sure, that you want to do xyz?" It would be nice, if "This allows you to..." etc. could be one string wich works everywhere, where it is needed. The "xyz", which are also very often just the same, could complete the sentence and would also not need such a lot of different strings. But I don't know if this would be possible at all. ;) Seems to be a lot of work to me, anyway.

Translation was not that quick and simple as I thought before, ;)  because in german language sometimes a few more strings would have been better.  The "Miscellaneous strings" are used in several parts of the portal, single or together with other words. You can say in English "left", "left block", "left blocks", "used as a left block" or "on the left side". In German you can't use "left" (links) always and in any case. It has to be "Links" or "links", "Linker Block", "Linke Blöcke", "Blöcke links" or "Blöcke auf der linken Seite". It sounds just horrible, if the grammar is wrong. :D

I have tried to translate as close as possible to the original, but in some parts I made it different or left the english word instead of translating it. Or I used both, the english and the german words. For example "custom" is still there on some places. I hate the german word "benutzerdefiniert"for it, ;)  nobody is talking like this in Germany. So it is still "Custom" or "Eigenes" ("own"), which means exactly the same as "Benutzerdefiniertes", but is much shorter and more common.

I did not translate the file SPortalHelp.english.php yet, because I am not sure if it would be necessary at all? I think, the SimplePortal is simple and the descriptions in the portal itself are telling nearly everything as well? I did never use the "Help" in Portal.

I have got an old portal-help-file from SMF in "formal German". Maybe I can just copy it, change it to informal German and add those strings, which are new in ElkArte? Are there any? It would be less work, if I could do it that way.

Edit: I deleted the files for the moment... I will finish them today. There were a few changes to be done.

That's another area to improve: translation of addons...
Title: Re: German language files for SimplePortal
Post by: Ruth on June 01, 2016, 11:20:35 pm
I decided to translate the help-file completely new, because sometimes the german language there is a little "old-fashioned" ;)  and sometimes the explainations look a bit irritating or strange to me, maybe they are just old. Maybe sometimes they should say a little more, instead of just repeating, what you can already read there, if you are checking a box or select something?

I have got a few questions to those strings:

1.
Code: [Select]
There is no "mod" for colored user links, wich has to be installed and could be disabled. This is working without any mod as well. The portal is just displaying the user-names/links in those colors you have set for the several membergroups in forum. If you check this box in portal, you will see them no longer colored in portal, except in the online-block in portal.

Am I wrong with this?


2.
Code: [Select]
That one is new to me, I cannot translate it proper, because I don't understand it completely and I don't have a tablet or a phone, just an old pc. ;) What does this (phone not tablets) say exactly? It will disable the portal not on tablets, only on phones?

I need some help from @Jorin or @TE , maybe they can tell me common german words for tablets and phones.  :D


3.
Code: [Select]
That one seems to me not to be complete. Enabled, it will resize other images as well and it is possible to change this size in portal css. I did this with the recent attachments in portal. So maybe a sentence should be added here to explain some more?
Title: Re: German language files for SimplePortal
Post by: Jorin on June 02, 2016, 07:49:26 am
There are tablets (a little bigger than mobile phones and less big than notebooks) and mobile phones a.k.a. smartphones. And there are phablets. But better now in german:

I will upload them again, when they are all finished and without mistakes. (I hope so) ;)

The help-file is nearly finished as well, but I think, there is something missing. Not in the file itself, but maybe in the portal sources of my forum. I always get some errors in the log about the permissions/the membergroups in portal. The "help" in this part just says "sp_ProfilesAera", but it should show this:

Code: [Select]
I don't want to translate this large part without seeing what it will look like after translation. ;) 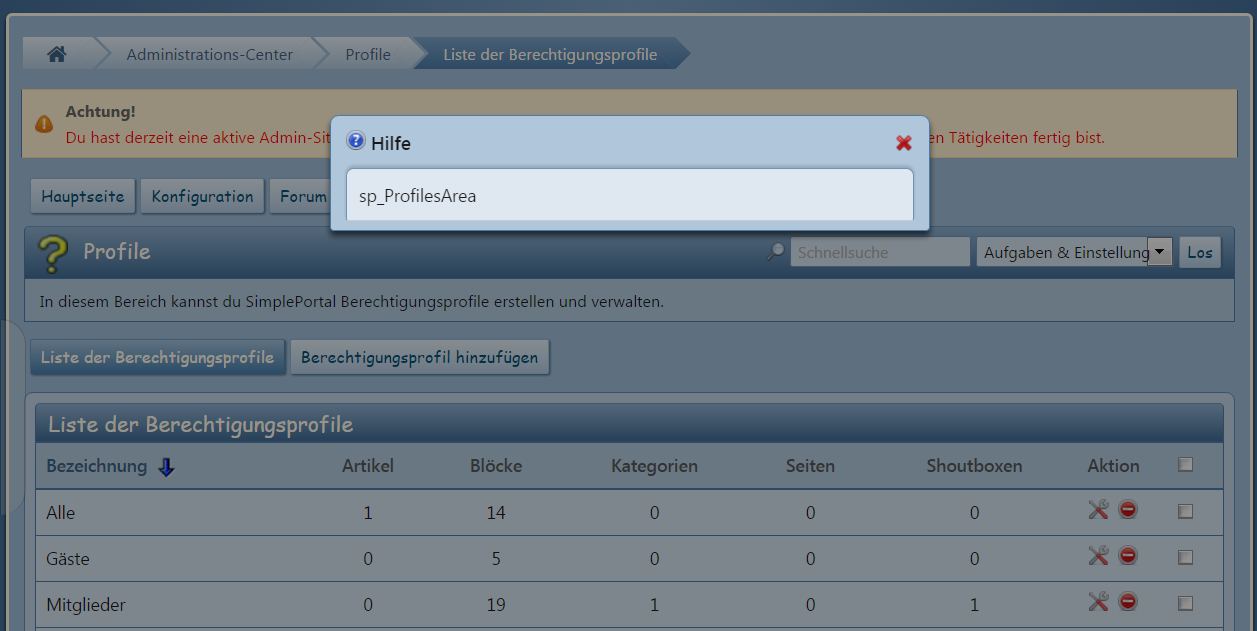 If you install the portal, it will overwrite this string, which is in Who.german.php on line 136
Code: [Select]
So now  it is "credits" again in the footer of my forum.

There is no string for "credits" in the portal laguage files. I have tried to add this string there, but it did not work. Where does this "credits" come from? How (and where) can I change it into german language?

Maybe I have to add something in the Addons.english.php? O:-)
Title: Re: German language files for SimplePortal
Post by: Ruth on June 05, 2016, 04:21:41 am
Finally I noticed, what was wrong with this string: $helptxt['sp_permissions']

This is still the old one from SMF ;)  it has to be $helptxt['sp_ProfilesArea'] now with ElkArte.

I have changed it that way and now I can see the text there in this help-popup. :)  I wrote a little description how to manage the permission profiles in portal. It is different to the old text there, before profiles were used for the permissions.

This string should be changed in the english help-file as well.

It is a bit strange, because those three profiles (all, guests and members) are already there, when the portal is installed, but you need to set the permissions, otherwise they will not work as the text says. Maybe this is another reason for the errors in the log?

Code: [Select]
Maybe there are three strings missing (for everyone, guests and members)? Because, if I edit a profile it says for example $_everyone not everyone, as it should be.

Quasimodo, where are you? ;) 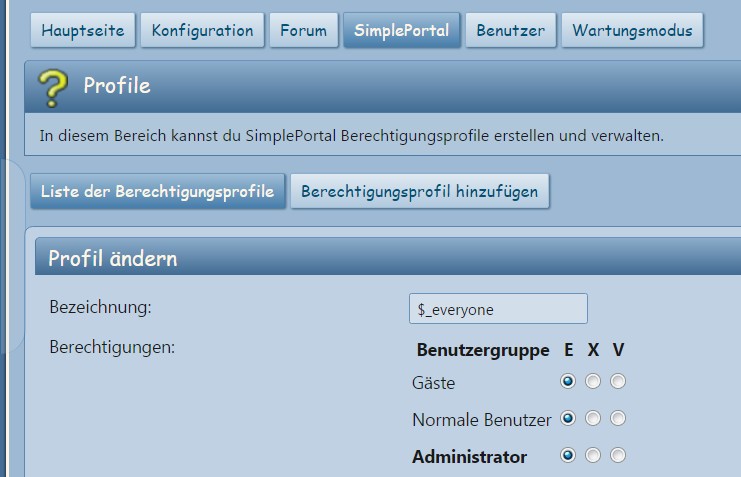 What have you done to poor old Quasimodo? 8)  Kidnapped him? Brought him to the cellar and locked the door? ;)

I really would like to finish the translation of those language-files, but I can't. O:-)  I have tried to add those three strings for the profile-names,  which maybe are missing, but it did not work. I think, there are more changes in other files, which need to be done...

A few blocks in portal are not working that way, as the "Help" says. One of those strings is for example:

Code: [Select]
You can't write an ID of a board into this field and you can't leave it empty. There is a list, where you can select the boards.

I have changed the text in some of those explainations, which was sometimes not easy to do for me, O:-)  because I was not always sure, if the block is just working in a new and different way - or if there is  something wrong or not working just in my forum or not finished yet. :D

It would be handy, if all "helping-strings",  which are telling "wrong things", because those blocks are working in a different way now, can get a new text in English. And strings, which are no longer used with ElkArte should get deleted in the English version. Translation would be much more easier and less work.

I agree on this. Maybe the author of the addon can use your translation as a template and update the original english files?

Title: Re: German language files for SimplePortal
Post by: Ruth on June 06, 2016, 09:51:01 am
Maybe...but there are some bugs in the portal....or some parts of the portal are not finished yet or not working proper. Than my descriptions must be changed again, because they are telling things like they are at the moment and in my forum and maybe they are wrong.

I think, there are a lot of strings, which could be just removed to make the files shorter. Specially those from the help-file.

For example: If you create a calendar-block in portal, there are three checkboxes to select, if you want to show birthdays, holidays and events there. Another block in portal will show no calendar, only the events. It has three checkboxes as well,  to show birthdays, holidays or events there. Each of them has got a special string in SPortalAdmin.english.php, wich says for example "Show birthdays". And each of them has another string in SPortalHelp.english.php wich says for example  "This will display birthdays".

This is so stupid, ;)  nobody will need an explaination, what will happen, if this checkbox is checked. It was a bit annoying to translate all those useless strings....and there are a lot of strings in the help-file, which are like this.

Maybe this fields could be changed? Specially that one for the board news...

I changed this by adding a overflow-y: auto in portal.css here:

If you install the portal, it will overwrite this string, which is in Who.german.php on line 136
Code: [Select]
So now  it is "credits" again in the footer of my forum.

There is no string for "credits" in the portal laguage files. I have tried to add this string there, but it did not work. Where does this "credits" come from? How (and where) can I change it into german language?

Maybe I have to add something in the Addons.english.php? O:-)

Not sure, if I was wrong with this, because I can't remember if it had really been "Credits" or  a german "Danksagung" in the Footer of my Forum before the portal was installed. But this string for credits in Who.german.php is not working, if the portal is installed.

Code: [Select]
I have changed it that way now. ;)
Text only | Text with Images